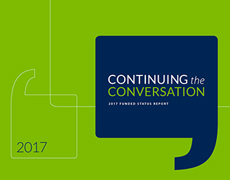 TORONTO, March 12, 2018 – OPTrust today released its 2017 Funded Status Report, which details the Plan’s ninth consecutive fully funded position and financial results. OPTrust achieved an investment return of 9.5% for the total fund, net of external management fees. The organization also received high scores, with members and retirees rating their service satisfaction as 9 out of 10. In addition, OPTrust is one of the first plans to report in accordance with the recommendations of the Task Force on Climate-related Financial Disclosures (TCFD).

"Last year, we started a conversation within our industry about what we believe matters most to our members,” said Hugh O'Reilly, President and CEO of OPTrust. “Our answer hasn’t changed: it’s the Plan’s funded status. That’s why this year, we are continuing the conversation.”

“The funded status is the foundation on which secure, sustainable retirement futures rest, and for us, it is the measure that matters," O’Reilly added. “We are working in an environment where investment returns are increasingly difficult to achieve without taking excess risk, and we are dealing with the effects of the ongoing maturation of the Plan. These challenges require constant innovation on our part. We also share our ideas and successes with others, which is an important part of being good pension citizens.”

The Plan remained fully funded in 2017 on a regulatory filing basis, while the organization continued to strengthen its actuarial assumptions to enhance long-term funding health. The Plan’s real discount rate was lowered to 3.30%, net of inflation, from 3.40% in 2016, reflecting increased actuarial margins and reducing the risk of future losses due to investment returns falling short of the expected cost of members’ future pensions.

With an update of assumptions regarding member longevity, the Plan has addressed the likelihood that members’ life expectancy will continue to increase, thereby increasing the Plan’s pension obligations. The funding valuation confirmed deferred investment gains of $885 million at the end of 2017, which should further improve funded status in the years to come.

OPTrust introduced its member-driven investing (MDI) strategy in 2015 with a singular focus to increase the likelihood of plan certainty by balancing the objectives of sustainability and security to better align the Plan’s outcomes with members' needs. Superior risk management has helped the Plan to improve its funded status, maintaining stability and helping to ensure the Plan can weather a severe market downturn, like the one experienced by the global economy in 2008. The Plan's net assets increased to over $20 billion at 2017 year-end, up from $19 billion as at December 31, 2016.

More detailed information about OPTrust's 2017 strategy and results is available in its Funded Status Report at optrust.com.

With net assets of over $20 billion, OPTrust invests and manages one of Canada's largest pension funds and administers the OPSEU Pension Plan, a defined benefit plan with over 92,000 members and retirees. OPTrust was established to give plan members and the Government of Ontario an equal voice in the administration of the Plan and the investment of its assets through joint trusteeship. OPTrust is governed by a 10-member Board of Trustees, five of whom are appointed by OPSEU and five by the Government of Ontario.