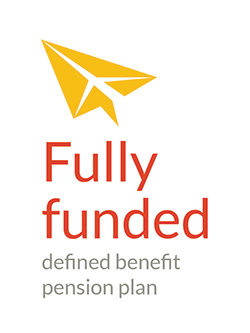 TORONTO, March 13, 2017 – OPTrust released its 2016 Funded Status Report, which details the Plan's eighth consecutive, fully funded position and financial results. In 2016, OPTrust achieved an investment return of six per cent for the total fund, net of external management fees and outpaced all of its benchmarks. The organization received high scores with members and retirees rating their satisfaction with a score of 9.1 out of 10.

"The measure of success that matters the most is the Plan's fully funded status," said Hugh O'Reilly, President and CEO of OPTrust. "We are risk allocators, not asset allocators. That's why the true goal behind short-term performance is the long-term funded position. OPTrust has decreased risk and strengthened its fully funded status. That ensures our ability to pay pensions today and preserve pensions for tomorrow."

The Plan remained fully funded in 2016 on a regulatory filing basis, while the organization continued to strengthen its actuarial assumptions to enhance the long-term funding health of the Plan. The Plan's real discount rate was lowered to 3.4 per cent, net of inflation, from 3.55 per cent in 2015, reflecting increased actuarial margins and reducing the risk of future losses due to investment returns falling short of the expected cost of members' future pensions. The funding valuation confirmed deferred investment gains of $681 million at the end of 2016, which should further improve funded status in the years to come.

OPTrust introduced its member-driven investing (MDI) strategy in 2015 with a singular focus to increase the likelihood of plan certainty by balancing the objectives of sustainability and stability to better align the Plan's outcomes with members' needs. During 2016, OPTrust began implementing MDI through dynamic portfolio construction of the total fund with its illiquid and liquid strategies. The Plan's net assets increased to $19 billion at year-end ($18.4 billion as at December 31, 2015).

More detailed information about OPTrust's 2016 strategy and results is available in its Funded Status Report.