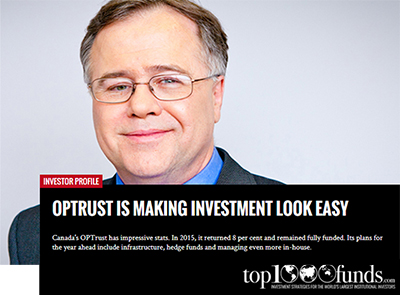 Impressive statistics from Canada’s OPTrust, manager of C$18.4 billion ($13.9 billion) in assets for 87,000 former and current public-service employees in Ontario, make enviable reading for pension funds weighed down by deficits and low returns. In 2015, the fund returned 8 per cent and remained fully funded. Over its 21 years of operation, its investment portfolio has realised an average annual return of 8.4 per cent and, on average, 73 cents of every pension dollar paid to beneficiaries in the mature plan is generated by investment returns.

“Our investment strategy is based around the interests of our members, first and foremost,” explains Hugh O’Reilly, president and chief executive of the fund. “We are investing … to protect the funded status of the plan; we are not beating a benchmark. We take risks to generate returns but we will not jeopardise our funded status or our level of contributions. We see ourselves as a pension fund and not an asset manager.”

Prioritising members has led to a member-driven investing (MDI) strategy that O’Reilly contrasts with better-known liability driven investment (LDI), in which strategy is shaped around the cash flows needed to fund future liabilities.

“Some pension funds have adopted LDI, while others seek to maximise their returns,” O’Reilly says. “There is no right answer. We are driven by our members, by demographics and by what makes sense to us. If one looks at the Canadian model, therein lies a recipe for success founded in a few factors. Our plans are governed independent of the government and unions. We have internal investment teams, which allows us, generally speaking, to run the pension plan at a low cost, and our contributions are strong.”