TORONTO, March 9, 2020 – OPTrust today released its 2019 Funded Status Report, Retirement by Design, which details the Plan’s financial results and fully funded status. Over the past 10 years, OPTrust has achieved an average annual investment return of 8.2 per cent for the total fund, including a return of 11.2 per cent in 2019. The Plan once again lowered its discount rate in order to protect against future market volatility.

Good pension plans are built to last,” said Peter Lindley, President and CEO of OPTrust. “We recognize that what matters most to our members is knowing their pension will be there when they retire. In our eleventh consecutive year as a fully funded Plan, we are well positioned to serve our members’ interests for the long term.” 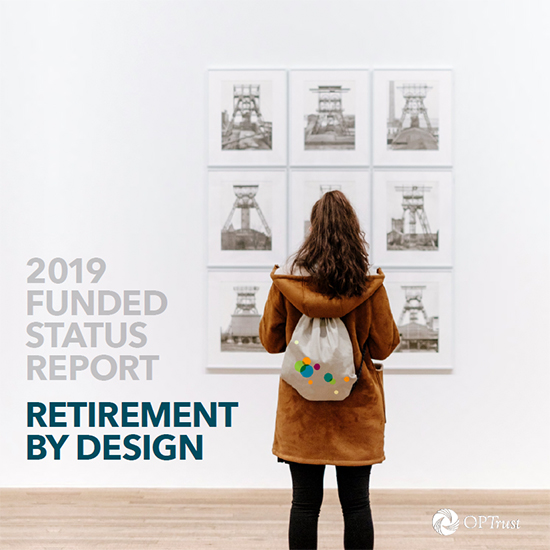 OPTrust Select, the new defined benefit pension offering from OPTrust, began enrolling members in 2019. As of December 31, 28 new employers had joined OPTrust Select, representing 930 potential new members to the Plan. OPTrust was also recognized for exceptional service to members in 2019, with members and retirees rating their service satisfaction as 9.2 out of 10, a top-three placement in a global benchmarking survey. CEM Benchmarking also reviewed investment performance and reported that OPTrust investments perform in line with peers with less risk to funded status and at a lower cost, after adjusting for asset mix.

“For OPTrust, Retirement by Design really means two things,” said Lindley. “It’s the way in which we invest for the long-term interests of our members, as well as the increased availability of defined benefit pensions through the launch of OPTrust Select. This offering is designed specifically for the nonprofit, charitable and broader public sectors — groups that have not traditionally had access to the security and stability of defined benefit pensions.”

OPTrust continued to strengthen actuarial assumptions in 2019 to enhance the long-term funding health of the Plan. The Plan’s real discount rate was lowered to 3.1%, net of inflation, from 3.15% in 2018. OPTrust continued to report in accordance with the recommendations of the Task Force on Climate-related Financial Disclosures (TCFD), having become one of the first plans to do so in 2017. More detailed information about OPTrust's 2019 strategy and results is available in Retirement by Design.

With net assets of almost $22 billion, OPTrust invests and manages one of Canada's largest pension funds and administers the OPSEU Pension Plan (including OPTrust Select), a defined benefit plan with over 96,000 members. OPTrust was established to give plan members and the Government of Ontario an equal voice in the administration of the Plan and the investment of its assets through joint trusteeship. OPTrust is governed by a 10-member Board of Trustees, five of whom are appointed by OPSEU and five by the Government of Ontario.