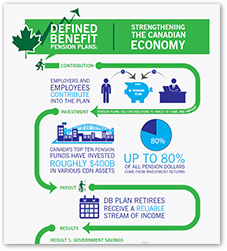 The study, conducted by the Boston Consulting Group (BCG), confirms that an estimated 10 to 15% of DB beneficiaries collect the GIS, compared with 45-50% of other Canadian retirees. DB pensions reduce the annual pay out of GIS, a supplementary government benefit provided to low-income seniors, by approximately $2-3 billion a year.  The study also finds that defined benefit recipients contribute $14 - $16 billion annually to government coffers across Canada through income, sales and property taxes.

DB pension plans are retirement vehicles under which the plan sponsor, typically a large employer, commits to a specified, predictable monthly benefit on retirement based on the employee's earnings, years of service and age. Both the member and the employer contribute, with the vast majority of pensions paid coming from investment returns on these contributions.  An analysis by the four plans that commissioned the study found that as much as 80 cents of every pension dollar comes from investment returns – a testament to the sound funding and “best in class” investing of the pension funds.

Conclusions of the BCG analysis included:

“The two most significant advantages DB plans offer members are pooling longevity risk and pooling asset risk. A DB plan allows members to save at a collective rate consistent with the average life expectancy or distribution within the group. Similarly with asset risk, DB plans can typically maintain an asset mix reflective of the group rather than any one individual. Both advantages provide stability for members, allowing for a consistent standard of living throughout their lives," said Michael Block, BCG Principal and project lead.

A separate analysis by BCG released in June found that Canada’s ten largest public pension funds – which include the defined benefits plans in this new analysis - provide Canadians with one of the strongest retirement income systems in the world and also contribute significantly to national prosperity.

Among the key findings of the June study:

Bill Hatanaka, President and CEO, OPTrust said:  “DB retirees can count on greater certainty in retirement with a stable monthly income based on the number of years they contributed to their plan, so they are more comfortable in spending what they receive, helping fuel the Canadian economy. Not only do they pay up to $63 billion annually for goods, services, and related sales and property taxes, they pay an additional $7-9 billion in income taxes every year.”

Jim Keohane, President and CEO, HOOPP, said: “Most people aren’t aware that up to 80 per cent of the funds used to pay defined benefit pensions come from returns on plan investments.  Canadians should look at how we can replicate this success story for those without adequate, or in many cases any, workplace pensions.”

Jim Leech, President and CEO, Ontario Teaches’ Pension Plan said: “DB retirees are far less likely to rely on government social assistance in retirement, freeing up funds for other government programs or priorities. Their financial independence is a direct result of the pensions made possible by the asset management expertise in our DB pension plans.”

Michael Nobrega, President and CEO, OMERS, said: “We need to change the conversation. We must not allow “pension envy” to define the debate on the reform of our pension system. Let’s work together to fix what’s really broken – the lack of adequate retirement savings among the majority of Canadians.”

Disclaimer: Information in this document is sourced from a Study conducted by The Boston Consulting Group (BCG) and commissioned by Healthcare of Ontario Pension Plan (HOOPP), Ontario Municipal Employees Retirement System (OMERS), OPSEU Pension Trust (OPTrust) and Ontario Teachers’ Pension Plan (OTPP). The materials excerpted by commissioners from the Study referenced are provided for discussion purposes only and may not be relied on as a stand-alone document.  Additional analysis has been done to the data and analysis contained within the Study by third parties other than BCG.  BCG has not independently verified this additional analysis and assumes no responsibility or liability for it.