TORONTO, March 29, 2019 – OPTrust today released its 2018 Funded Status Report, which details the Plan’s financial results and funded status. OPTrust achieved an investment return of one per cent for the total fund in 2018. In addition to remaining fully funded, the Plan lowered its discount rate, already the second-lowest of Ontario’s public sector plans. The organization also received high service scores, with members and retirees rating their service satisfaction as 9.1 out of 10, a top-six placement in a global benchmarking survey. 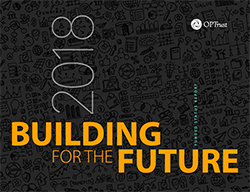 “OPTrust’s objective is to maintain the funded status of the Plan without taking excessive risk,” said Doug Michael, Interim President and CEO of OPTrust. "In the worst year for markets since the global financial crisis, we maintained our fully funded status for the tenth consecutive year and increased the long-term stability of the plan by lowering our discount rate.”

Implemented in 2015, OPTrust’s Member-Driven Investing (MDI) strategy seeks to increase the likelihood of Plan certainty by aligning outcomes with members' needs. Superior risk management has helped to improve funded status, maintain stability and increase the Plan’s ability to weather a severe market downturn, like the one experienced by the global economy in 2008. OPTrust once again reported in accordance with the recommendations of the Task Force on Climate-related Financial Disclosures (TCFD), having become one of the first plans to do so in 2017.

“As the world continues to change at an increasingly rapid pace, OPTrust’s members can know their pension plan is stable and secure,” said Michael. “We remain focused on the long term rather than day-to-day changes within the market. For our members, the funded status is the measure that matters.”

The Plan remained fully funded in 2018 on a regulatory filing basis, while actuarial assumptions continued to be strengthened to enhance long-term funding health. The Plan’s real discount rate was lowered to 3.15%, net of inflation, from 3.30% in 2017. This move added conservatism to the Plan’s funding valuation by calculating a higher liability value, which helps to protect the Plan from future market volatility.

More detailed information about OPTrust's 2018 strategy and results is available in Building for the Future.

With net assets of almost $20 billion, OPTrust invests and manages one of Canada's largest pension funds and administers the OPSEU Pension Plan, a defined benefit plan with almost 95,000 members and retirees. OPTrust was established to give plan members and the Government of Ontario an equal voice in the administration of the Plan and the investment of its assets through joint trusteeship. OPTrust is governed by a 10-member Board of Trustees, five of whom are appointed by OPSEU and five by the Government of Ontario.